This will be the last article explaining the different states we can use in a step function. We’ll see three simple states like Pass, Fail and Succeed and finally, we’re going to a see a more complex state like Choice. And obviously, we’re going to use the http://serverless.com framework to deploy them.

The pass state is a simple state that just passes its input to its output, without performing any work. Apart from the common fields, you can specify two optional fields:

The fail state stops the execution of the Step Function and marks it as a failure. It only allows the Type and Comment fields from the common fields, and you can use a couple of optional fields:

The succeed state stops the execution of the Step Function successfully. It’s a terminal state, so it doesn’t have a Next or End field. It’s a good target for a choice branch that you just want to stop the execution.

The choice state allows you to declare a decision logic into your state machine. You can specify different branches with different logic to access them. In addition to the common fields it adds a couple of fields:

Each choice rule contains a comparision and a next field. Comparisions can be composed using And or Or operators. You can check all the operators available here.

When defining a comparision you must specify two fields:

Let’s put everything together

So, let’s put all we’ve learned so far in a single step function (without any lambda this time):

What are we defining here is a step function with two choices (number greater than 0 and number less than zero) and a default state. Every choice has a next state. Both PositiveNumber and NegativeNumber are Pass states with a different result, the Zero state is a Fail state and the FinalState is a Succeed state. 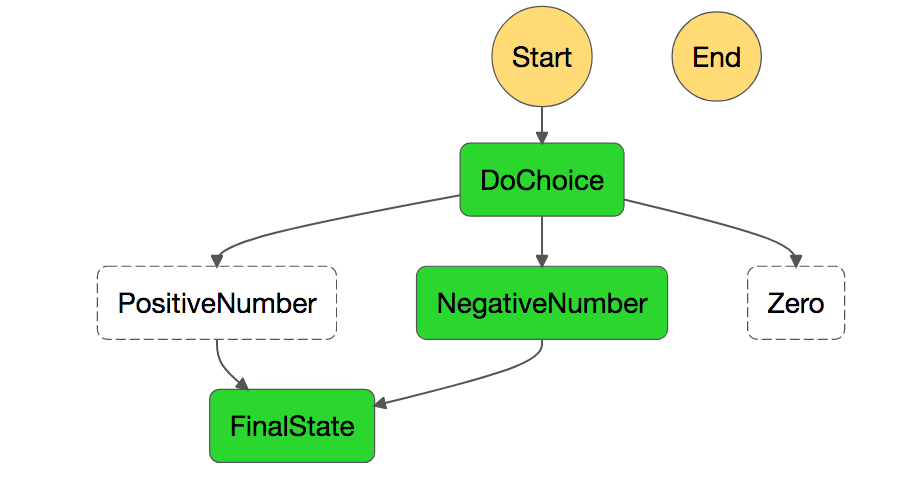 Let’s deploy and run the function and see what happens.

We’ve seen how easy is to set up a choice state in State Functions, allowing us to choose different paths depending on the input of the state.